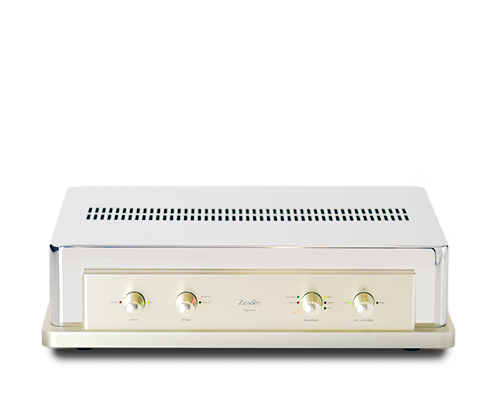 Many people believe that the recording curves of stereo LPs were unified in RIAA. However, as a result of a survey that Zanden conducted, we reached the conclusion that, TELDEC, EMI, COLUMBIA, and DECCA curves also exist in addition to RIAA and must be supported. In addition, we have come to the conclusion that it is necessary to set three types of fourth time constants in order to reproduce the sound of stereo LP perfectly and accurately. Further, if the recording phase of stereo LPs takes the output phase of current stereo LP cartridges as its reference, then the existence of recordings with extremely numerous inverted phases also has been identified. These facts overturn the conventional wisdom about stereo LPs. Zanden's Model 1200 Signature solves all of these issues.

The newly developed fully balanced LCR EQ circuit produces a detailed and solid soundstage. The hearing experience is comparable to listening to a master tape and makes one forget that the source is a vinyl disc. This unique circuit also brings intensity of music to the listener and transports him/her to the concert hall. It enables the listener to experience live performance on stage, rather than the traditional feeling of listening to the performance at a great distance in the audience seat of the concert hall. When played back by the correct equalization curve and phase with this circuit, stereo LPs will present us with a wonderful and amazing world of music never experienced before.

Front of PowerBoxClick to Show

Rear of PowerBoxClick to Show